Living with teenagers, whose every track is affected by their trauma, is like a train ride. Recently has been no different. We have moved house. We were on the coastal route, slow train by the sea. A chance to soak up the views. To kick back, and chill. A chance to look at the scenery. A chance to take stock.

I know this train well. I know that we are on a circular route. I know the regular stations. I know where we get stuck. I know where the maintenance areas are, when everything……grinds……to……. a….halt.

I didn’t miss it. I expected it. I was waiting for it.

The train picked up.

Slowly at first. The fields crept by quicker. The animals became less clear. Then faster. The station signs going too fast to read. The pressure exerting on the seat. Too fast to lift your head. Faster it goes. There is nothing you can do. There are no seat belts. There are no harnesses. We plough through Grand Central Trauma Station. The blinding light as we shot out of the tunnel, snaps me back to reality.

One of them is screaming from the top of the stairs.  I go up. He is standing there. Hand on his neck. Blood coming through his fingers. Running down to his elbow. Dripping to the floor. Terror in his eyes. I grab a towel. I move his hand, and press the towel to his neck. He didn’t mean it. He had been arguing on line. He wanted to show them how upset he was. They told him if he was that upset to do it, they didn’t care. Even after they saw the blood coming from his neck, they didn’t believe he had done it. He started to sob, uncontrollably.

We cleaned his neck. The cut was about eight or nine inches long. It was on superficial. No stitches needed. We washed his hands.   We watched the redness from his blood swirl around the sink and down the plug hole. We had a hug. He went to bed. He went to sleep.

I checked on him a while later. He was curled up, asleep. He looked tiny. He looked so vulnerable.

We are on our trauma train. We never left it. We just had an excursion.

My Tweets
Join 1,775 other followers 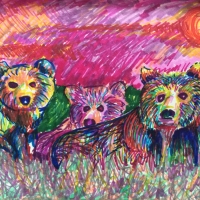 ...thoughts, news and views from a headteacher about supporting the needs of adopted children in schools.

The Art and Craft of Blogging

No More Than Twenty

...everything that won't fit in 140 characters

Our adoption journey with Bubble and Squeak